Every piece of jewelry is unique and special, but there are certain things which make our jewelry more meaningful. Whether it is a unique inscription, a specially designed assortment of stones, or the presence of your birthstone, it is the little touches that make our pieces sentimental, and there are few things more personal than our birthstones. Every birthstone is unique, and their history can be traced all the way back to the first century.

Fall brings a few of the most beautiful autumn birthstones with the months of September and October being represented by Sapphire, Opal, and Tourmaline. September claims the beauty of sapphire as a birthstone. October is unique, having both tourmaline and opal as birthstones. It is fitting that as the leaves begin to change these fall months have unique birthstones that present in differing shades and tones. Let’s take a deeper look at these Autumn birthstones.

Originating from the Greek word “sappheiros” and the Latin “sapphirus” meaning “Blue Stone” and the Sanskrit “sanipriya” meaning “dear to Saturn”, Sapphire is the birthstone of September. While most people think of sapphire and picture a royal blue stone, pure sapphires are colorless and it is through mineral impurities that the stones gain their stunning colors.

Sapphires are found in a multitude of shades from traditional blue to pink, green, yellow, violet, and padparadscha (a pink/orange combination). Sapphires do not come in red, as gemologists classify red sapphires under another category, rubies. The padparadscha sapphire, a combination of pink and orange color, is often associated with Sri Lanka, but this specific color sapphire has often sold for more than the traditional blue sapphire due to their rarity. Sapphires are more than just colorful stones. Throughout history, they have been used to instill loyalty and wisdom, channel higher powers to focus the mind, and been demanded by nobility from around the globe. 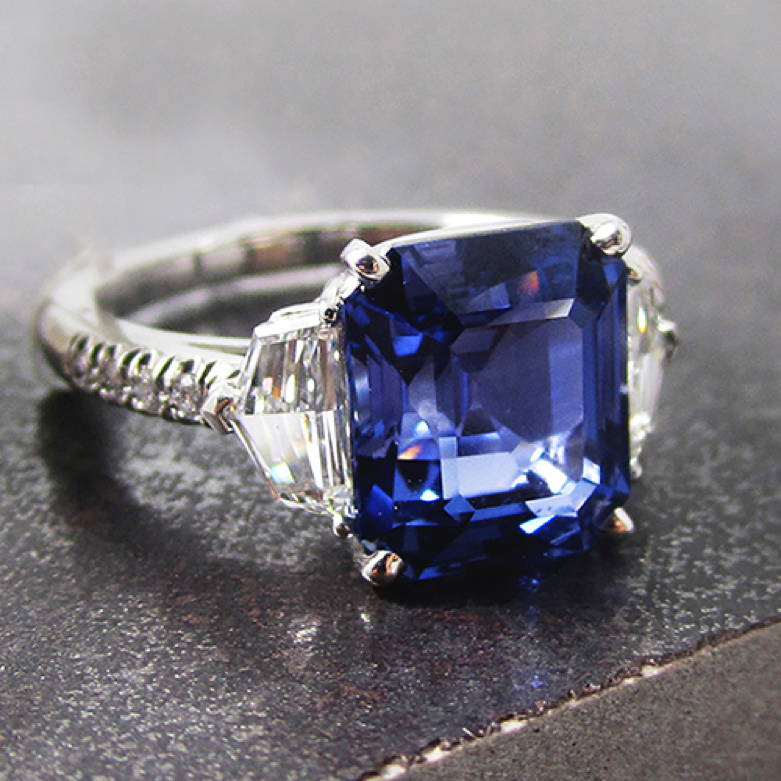 Sapphires are second in hardness only to diamonds, with a rating of nine on the Mohs scale. This hardness makes sapphires ideal stones for engagement rings and jewelry. The most famous engagement ring to feature a sapphire is the ring given to Lady Diana Spencer by Prince Charles in 1981. This ring continued to grow in fame after Prince William gave his mother’s ring to Kate Middleton during his 2010 proposal to the now Duchess. Sapphires are coveted around the world by jewelry makers and buyers of fine stones. Those born in September lay claim to the sapphire as their birthstone, making for a lifetime of beautiful jewelry incorporating these special stones.

October happens at the time of year when colors change and temperatures move from the warm days of summer to the crisp nights of fall. It’s no surprise then that autumn birthstones have a variety of colors and tones. Perhaps no stone is more indicative of this change in seasons than the tourmaline. The assortment of compositions, along with trace elements in the soil, produce tourmalines in more color combinations than any other mineral group. The Egyptians explained the beautiful colors of tourmaline as the result of stones passing through a rainbow on their travel upward from the center of the earth. 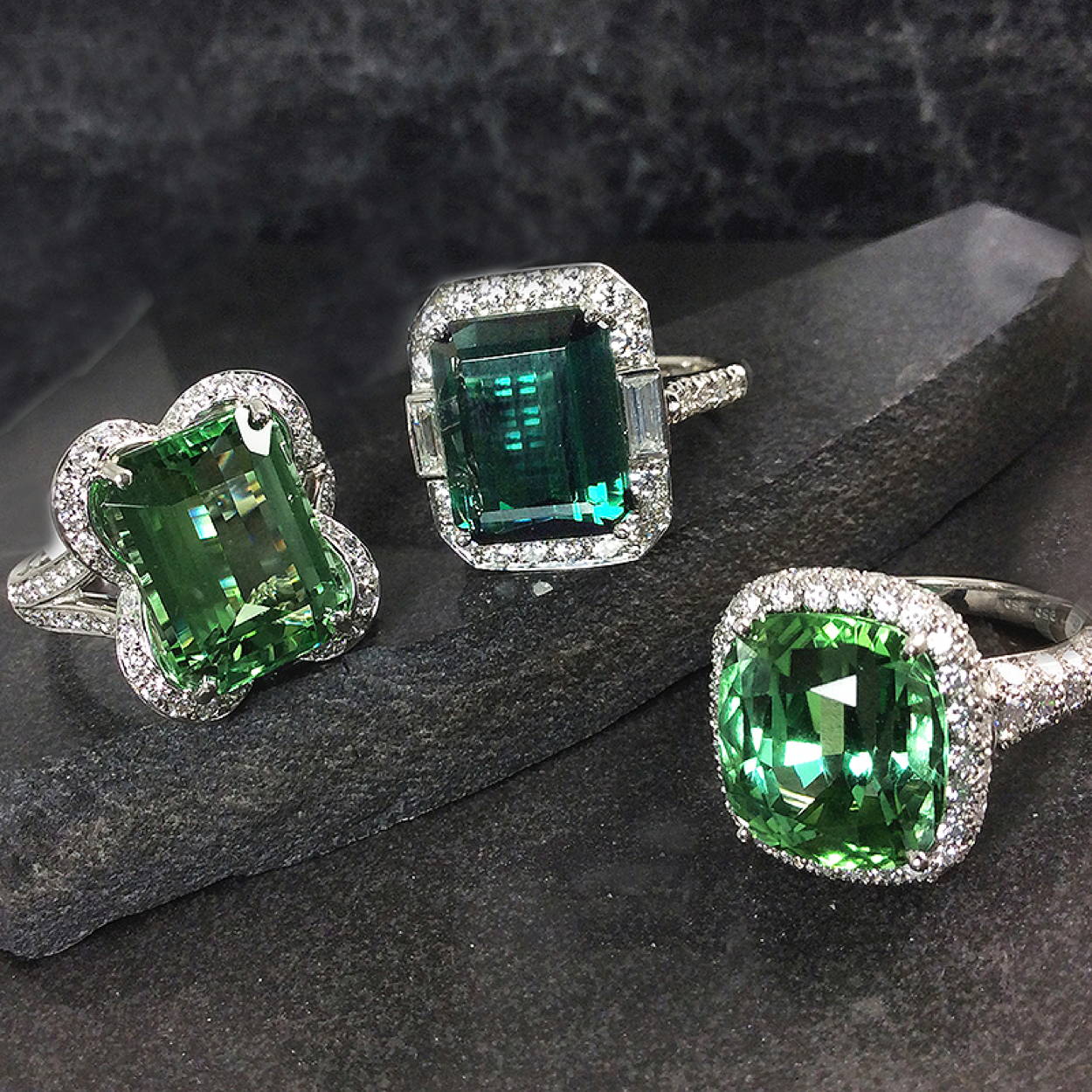 This autumn birthstone is mined around the globe. Brazil, Pakistan, Nigeria, Madagascar, the United States, Mozambique, Sri Lanka, and Afghanistan have all produced tourmaline gemstones. Different soil and mineral combinations across the globe contribute to the varied colors of tourmaline, with varying properties and compositions. Tourmaline ranks between 7.0-7.5 on the Mohs scale of hardness, making it durable and desirable for jewelry design. For comparison, hardened steel falls in the same range of the Mohs scale. Tourmaline also has the ability to become electrically charged through heat and pressure, producing magnetic properties in the stone. When charged, the stone can attract or repel dust and small particles.

Ancient magicians wore talismans made of black tourmaline to protect against negative energy and evil forces. Tourmaline is believed to be a protector against negative thoughts, radiation, toxins, pollutants, and evil forces, further contributing to its inclusion in jewelry pieces that shield the wearer. Tourmaline is displayed in jewelry as both raw and cut stones, with the largest cut tourmaline stone in the world weighing 191.87-carats after being discovered in Brazil.

Due to the variety of color and size, tourmaline is a popular gemstone for jewelry makers, providing anyone born in October with ample options to display this autumn birthstone.

October has the distinction of being a month with two recognized birthstones. While the changing of colors during the fall is often symbolic of change, the birthstone for October also displays a change of color. The Greek “opallios” from which opal comes literally means to see a change in color. Opals ability to reflect the colors of the rainbow is due to light diffraction from the microscopic silica spheres that make up an opal.

There are four widely recognized types of opals. Precious opals exhibit flashy plays of color, while common opals do not exhibit color play. Boulder opals contain one side of ironstone and are often cut flat and freeform to maximize the color displaying side of the opal. Fire opals are a variety of opal that has a yellow, bright orange, or bright red background color. They are different from precious opals in that no color play is necessary, but fire opals can also be precious if there is play-of-color present. Opals are often referred to by their background color, called the body color, with black or white being the most popular. 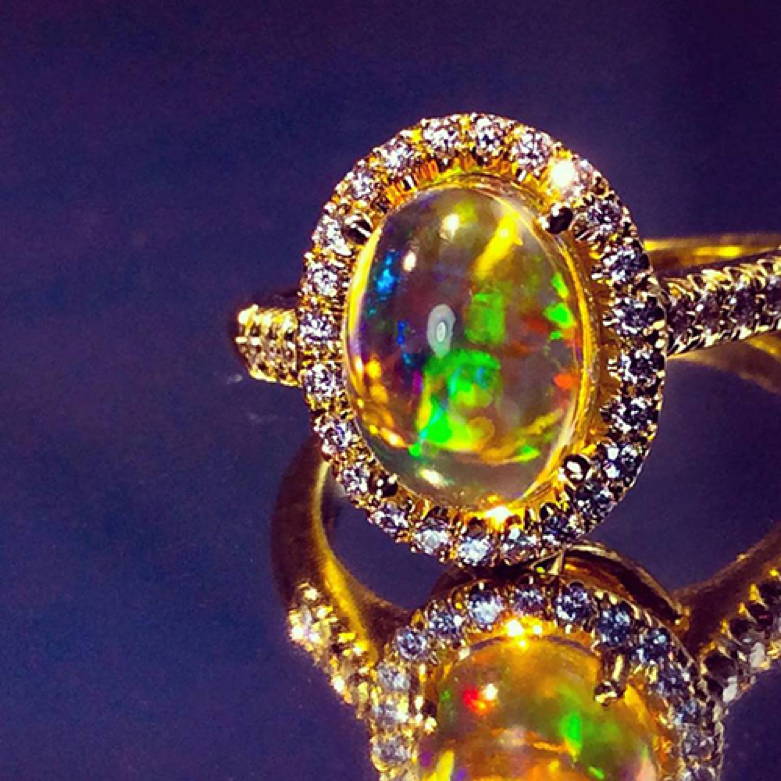 Opals have always been identified with luck, to the point that it has been said that it is bad luck for anyone not born in October to wear an opal. This has done little to deter people around the globe from wearing opals as they remain popular gemstones for jewelry.

With the changing of the seasons and the shift in color from the bright greens of warm summer days to the gold and red tones of the fall, these autumn birthstones are the perfect complement to the changing seasons for anyone born in September or October. Or truthfully for anyone who enjoys a display of varying color and light in their favorite piece of jewelry.