The first measurements of time had nothing to do with wristwatches or hours and minutes. Time was measured in cycles, with the two most prominent cycles coming from the sun and moon. The sun made a return every day, helping to standardize a smaller unit of time, but the moon provided a gradual measure of time as it changed phases overhead throughout a significantly longer period. These phases of the moon eventually began to mark periods of time throughout a calendar year, with full moons earning names such as “Wolf Moon” (January) and “Harvest Moon” (September) from Native Americans to mark the change in seasons. This fascination with the moon as a marker of passing time transitioned to the creation of timekeeping instruments.

What is a moon phase complication?

The moon phase complication depicts the 29 day, 12 hour, 44 minute, and 2.8 second lunar cycle by revealing the current phase of the moon through a sub dial on a watch. The moon disc is made up of two moons – typically one that represents AM and one for PM. 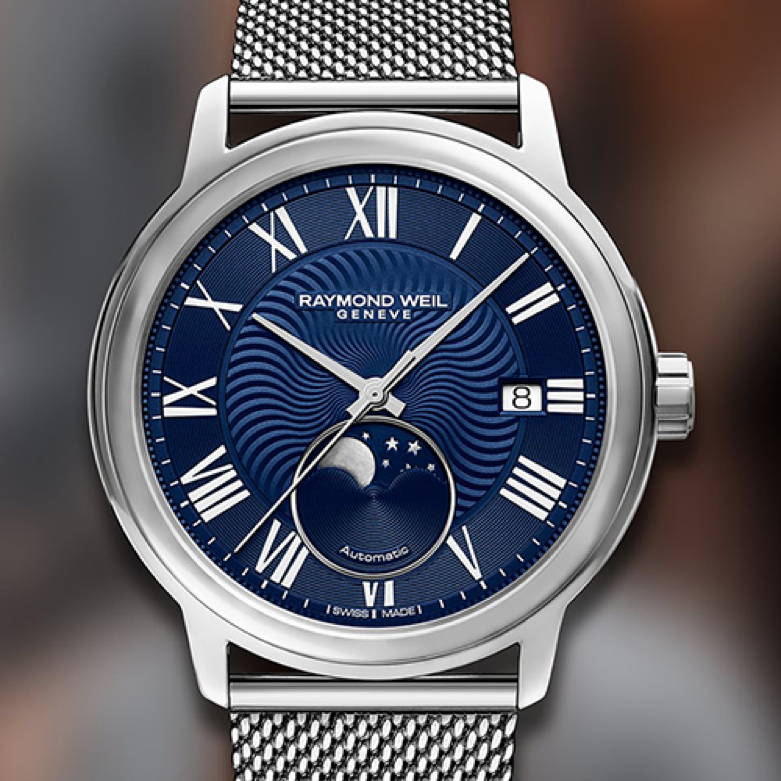 The Moon Phase indicator was one of the earliest known complications. They are rooted in math, making them a logical complication for watchmakers and timepiece designers obsessed with accuracy and precision.

While all moon phase complications require manual adjustment to keep them in sync with the changing moon phase, the level of precision varies greatly. Due to the mathematical nature of calculating moon phase displays, most complications require this adjustment every three to ten years to keep it exact. The record for precision can be found inside the Andreas Strehler Sauterelle à Lune Perpétuelle 2M, which requires no adjustment for 2,060,757 years. Yes, you read that correctly, no adjustment for 2.06 million years. This complication is considered perfect because at the time it would be required to adjust the complication, the orbit of both the earth and moon will have changed enough to completely recalibrate a new complication.

How does a moon phase complication function within timepiece?

As the center wheel of the movement makes one rotation per hour, a series of gear ratios forming a reducing gear train are used to transition from one hour to approximately one lunar cycle. The hour wheel controls the movement of the hour and minute hands on the timekeeping function. Completing one rotation every twelve hours, as most watches indicate 12-hour cycles instead of 24 hours, in watches with a moon phase complication the hour wheel also drives the moon disc driving wheel at a ratio of 1:2. The moon disc driving wheel has a one-tooth gear, a finger gear, mounted co-axially to drive the moon disc. The moon disc has 59 peripheral teeth and lays under the dial, hidden from view on most timepieces. The result is a moon disc which is advanced one time per day. Placing two moons on the disc means that each moon is rotated through every 29.5 days, roughly equivalent to the lunar cycle.

Please visit our downtown Columbia location to learn more from our expert staff about this and other complications.